I’m one of those people who are always cold.

I honestly can’t even imagine living in any part of the world where the temperatures drop precipitously and the snow falls heavily.  Heck, even the eastern part of the Pacific Northwest sounds pretty awful to me in the winter!  I am definitely a West-of-the-Cascades sort of person.  I can’t handle much below 40 degrees.  In fact, I’m most comfortable around 70-75 degrees, outside and in.

Which is why I was so so adamant about having a wood stove installed when we built our house.  I can’t afford to use the furnace to achieve my target temperature (propane is expensive), but I sure can use all the free wood Jasper chopped this summer to stoke a blazing fire!

And I love it.  I love it every day and every night when it is crackling away happily and I am warm.

I would be remiss, however, if I didn’t admit that the wood stove didn’t quite go according to plan.  Actually, a lot of things didn’t go according to plan, but that’s probably a post in and of itself, and I am here working hard at appreciating what we do have (which is a beautiful new house and a warm fireplace) and not dwelling on what we don’t have (which is the pinterest-worthy house I dreamed of but could not realistically afford).

So.  Anyway.  The wood stove ended up standing alone in the corner instead of the middle of the wall in a fireplace surround, and that’s OK.  It works for us, and keeps the house cozy and warm and that’s the important thing.

To make feeding the fireplace easier on ourselves, Jasper’s very first project after me moved into the farmhouse was to build a new woodshed.  Most of our wood is stacked down in the woodlot past the lower field, in what’s left of an old metal pole barn.  That’s where Jasper and his dad dragged all the blown down trees last summer and did all the work of cutting rounds and splitting them.  But we needed something a little smaller and a little closer to the house, because walking a quarter of a mile down to the woodlot every night to get a load to fill up the stove just didn’t sound appealing.

In just two days Jasper built this little shed, using mostly wood and cedar shakes recycled from the old shed we took down last spring, or milled lumber we found down in the lower garage.  I think the only thing we bought were those hinges for the doors. 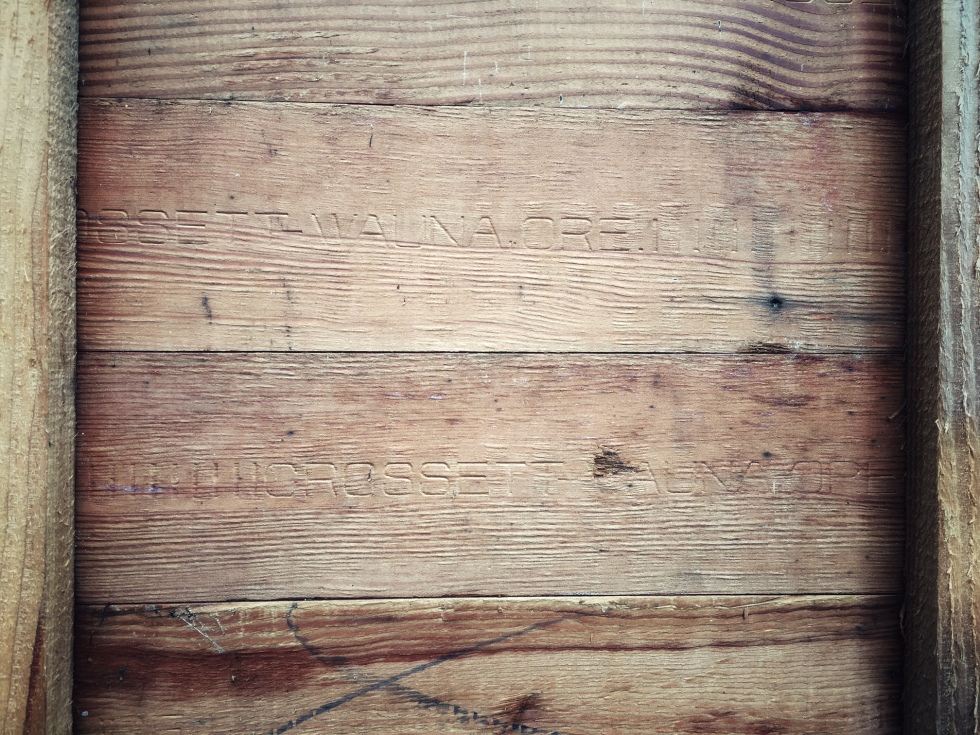 He also used some reclaimed wood from the original farmhouse.  The boards in the picture above were originally part of the walls and ceiling of the house, and were milled at the Crossett Western Lumber Company at Wauna at the turn of the 20th century.  They’re pretty neat to look at every time we open the woodshed doors.

He didn’t use any plans to build it, just a vision in his head, and I think it turned out pretty good.  But, as I’m sure will happen frequently on this journey of ours, we’ll need to tweak it a little come summer.  There isn’t enough of an overhang on the roof, and the doors don’t shut tight at the top, so water drips right in and gets the first row of wood a bit damp.  Also, the latch he made swells in the wet weather and makes it almost impossible to close securely at times.  For now though it works well enough, and there is so much else to do before spring comes knocking.

Not least of which is keeping warm in front of the wood stove on these cold winter days.