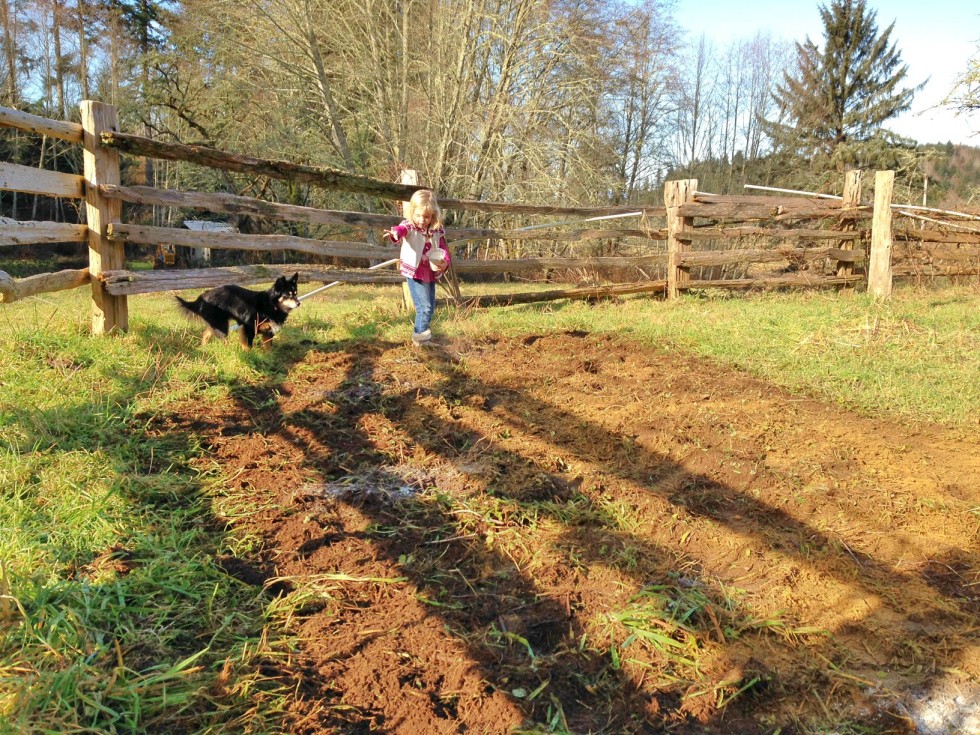 With the first hint of warmer weather, they just literally start popping up.  There is never a lack of things to do.

Unfortunately, however, we do have a lack of time.  From where we’re living now, the drive out to the farm is still about 30 minutes long, so we’ve been spending a lot of time lately driving back and forth.  We never seem to spend more than a couple of hours at the farm itself, because we have to make sure and get back to town before our oldest daughter gets home from school in the early afternoon.

Lord, will it be nice to live there, and just be there already to do all the things that need doing!

Like cleaning up and tilling the garden for spring planting:

All I need is some twangy banjo music accompaniment to complete the picture- the garden looks that awful!  It hurts my heart a little bit to see it looking so neglected and trashed.

It’s my own darn fault – I got lazy last fall and didn’t clean up properly when the season was over, so there’s still corn and sunflower stalks lying about, and the pulled, brittle skeletons of asparagus and radish blooms.  Cleaning up the garden is so important, to get rid of pests and diseases, and to prevent this exact sort of last minute scramble, but we got wrapped up in selling our house and just let it go.

Bad on us.  Me, specifically.

So.  Number one on my list of things to do is to rake up all that detritus and do a general tidy up.  We spread that black plastic sheeting and the cardboard out to kill off some of the grass, but I think it’s probably time to pull that up and just give everything a good till.  Then we can spread out manure and amendments, till again, get ready for planting and for the prettiness to come back.

Chore number two is pruning.  So.  Much.  Pruning.

We had an arborist come out last month and give us an estimate, but it would have cost about $1200 to get all the fruit producing trees into tip-top shape.  We might hire them next year, but we decided that this year that money would be better spent on building a house for us to live in.

So we’re pruning them ourselves!  We’re trying to stick to commonsense things like getting rid of suckers and dead branches, but really we’re complete amateurs and have no idea what we’re doing.  The trees have been untouched for a number of years though, so I’m pretty sure any love and attention we can give them will pay off.  We hope, anyway.

And, lastly, all that garden cleanup and tree pruning means it’s time for some more fires!

The weather has been wet and pretty unpleasant lately, contrary to what my photos might lead you to believe.  It took us a few separate tries on a few separate days to finally get the first pile of very wet wood to burn, but we did it!  Now we just need to do it a few more times, weather willing.

Ah, chores.  Accompanied by the earthy, dark smell of freshly turned dirt and the tang of smoke in the breeze.  It’s hard and dirty work, but it does lift the spirits so.